Fine art in Trinity is everywhere, but pre-eminent are the 128 panels in the ceiling of the nave painted by the noted muralist, Mr. Arthur Covey of Torrington, Connecticut. After careful Biblical and symbolic research, Mr. Covey spent approximately a year and one-half to complete the project. The panels were painted in oils at the artist’s studios in Connecticut and Florida, shipped to Worcester and made part of the structure of the nave.

The following is a description of the Mural Ceiling in the Nave, as written by the artist for the 1952 book “Trinity Lutheran Church, Worcester”. 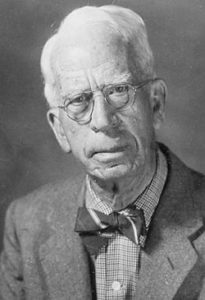 The ceiling vault as presented in the architect’s drawings showed a completely decorated space by means of lines, architecturally decorated by beams, moldings and intervening spaces, comprising 128 panels approximately 8′ x 5′ and 5′ x 5′.

This vault had great beauty in itself, and it might well have remained all in gray wood without further enrichment.  But Mr. Jeppson, his building committee and Mr. Larson thought differently.  They worked out an ingenious scheme by which a painter might proceed with the decoration without benefit of ladders or scaffold and without necessity of the painter’s lying on his back (like Michaelangelo) for a period of eighteen months.  To them this artist is extremely grateful.

To those of you who have studied the small scale design in color, it will be observed that marked changes were made.  Background accessories were eliminated, leaving the tall figures to make their statement with added power.  There is a saying that a true artist in known best by what he omits.  From ninth century mosaic decorations in Italy, I derived much in this regard.

Another change was made from the sketch.  Moldings between panels were made more slender, thereby increasing the areas of the panels themselves, resulting in a lighter, more Gothic feeling to the whole ceiling and giving painted panels more space for decoration. The color of background of panels agreed upon was a driftwood gray, with beams and moldings of the same color.

The challenging problem given the artist by the architect was the “break-up” of the ceiling, dividing it in such a way that there would be no monotony.  I first arrived at the idea of a frieze of major panels rising on either side from the brick wall, the general movement being from narthex to chancel.  Next I decided on a running vine motif for the flat section at the top. The remaining 64 panels, almost square, were separated into picture panels and symbol panels in checkerboard pattern.

It was at this juncture I was confronted with the choice of subject matter, which brought a deep sense of humility, more than I can convey to you.  I even thought at one time I could not proceed with the undertaking.  I had 128 spaces to fill and what should I put into them? I laid the matter aside and read and reread the Old and New Testaments.  I remembered my Sunday School days vividly.  I started listing subjects, the lists grew very long, and soon there were not half enough spaces.  I cut my lists down, and still there were too many.

For the larger panels (saints and prophets and others) I drew one-quarter size cartoons in charcoal to be transferred full size on the plywood panels.  My son, Stephen, drew all symbols and circular panels at full size in charcoal which he later transferred to plywood panels.  Only at this point did we begin painting.  In color I was influenced by the bright color found in the ceiling of a small thirteenth century church in Dadesjo, in the province of Smaland, Sweden, as well as the decorations in provincial houses in that country.

In Mediaeval Europe, the vast number of communicants could neither read nor write. Before Martin Luther’s time all services were said in Latin, thus shutting out all but a few worshipers.  Luther made the first vital translation of the Bible in a mother tongue.  The people coming out of humble cottages and hovels found in their churches an open Bible in the pictures and sculptures there.

I mentioned earlier that the ceiling vault now appears as follows:

Saint Paul, Saint Peter, and John the Baptist are seen in panels numbers 13, 14 and 15.  No attempt to keep chronological sequence was made, hence Martin Luther appers in panel number 16, as last of the left hand frieze, because of position. The main frieze at right of door shows the Four Evangelists, with appropriate symbols, in the first four panels, numbers 17,18,19 and 20. In panels numbers 21 and 22 the subject of the annunciation, the Virgin and the Angel, in shown. Panels numbers 23, 24, and 25 form a Triptych, or Nativity group. Panel 26, the Boy Christ and the Priest, is followed by the Baptism of Christ in panel number 27.

The lone figure of Christ, seated, in the Sermon on the Mount, is panel number 28. The Kiss of Judas, and Christ Tormented, appear in panels numbers 29 and 30. Christ Bearing the Cross is panel number 31, and finally the frieze ends in an expression of hope in panel number 32, the Angel at the Tomb. Thirty-two circular panels are disposed over the spaces at the sides in a checkerboard pattern.

The remaining panels contain the oldest authentic symbols of the Christian faith. Space here will not permit a listing of them. They are in most cases related to the adjacent picture panels.

The symbols and pictures on this ceiling are but a short introduction to the vast stores of riches in your Bible. You may not be able to draw them or paint them or put them into song or story, but you can form and carry your own images in your mind and so better realize the eternal truths which the Scriptures possess. It is my humble hope that what has been done here by myself, with the aid of my son as assistant, may be a help to you; and that some of the joy of the creation which was ours, may also be shared with you.

Explore further using the menu below